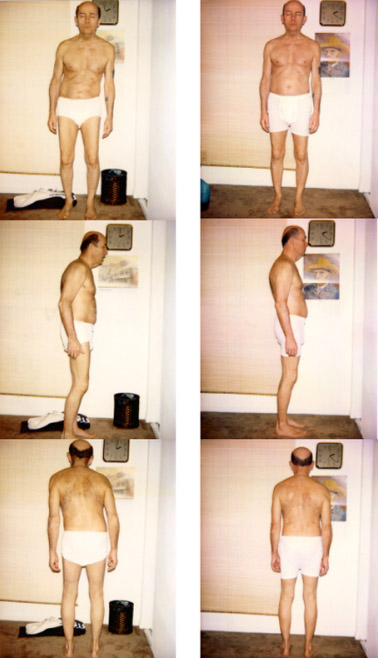 “After a lifetime of neck and lower back pain, 90% of my pain is now gone!” (see client photo, above or at right)

In an email in which he offered to fly Chad to New York to work on both he and his amazing partner, Zoe Klein, world renowned acrobat Dave Paris wrote, “Chad’s body treatment was a miracle for my shoulder. I had rotator cuff inflammation and could not lift my arm above my shoulder. This was a problem because I’m an acrobatic partner and needed to lift my partner over my head for long periods of time. I met Chad right before the biggest performance of the year, and in two treatments, I had full range of motion and power. Our show was a huge success and I forever feel indebted to Chad’s magical physical therapy and touch.”

“I was able to run the mini-marathon with my best time yet despite the knee injury I developed a few weeks before the race, thanks in large part to you!”

After completing a full day intensive, one client wrote “Thanks for being there and helping me to grow a little, walk a little taller, and understand a little more about myself…. This is truly the most important personal work I have done in a long time.”

A survivor of a head on collision said: “You have helped more in just two sessions than anyone ever has in 14 years!”

A client who underwent massive reconstructive knee surgery remarked: “After two months of physical therapy, I gave up on getting over my knee pain. But after the second Connective Therapy treatment, I felt tremendous relief.” (Months later) “Now I can climb stairs normally, dance, and garden only rarely feeling any knee pain.”

“I don’t remember feeling this good!”

A client with vertigo for over a year said: “I went to doctor after doctor for the vertigo I developed after falling and hitting my head on the ice last year. Despite my symptoms, they couldn’t find anything wrong. After two Connective Therapy treatments, it was gone!”

“Yesterday was probably the worst day of my life. Ten minutes before my appointment with you my sister called me and told me the news about my father passing away. Your help and support will never be forgotten. You are a wonderful man. I walked into your place a wreck and left mentally and physically well. Thank you.”

“I’ve had lower back pain ever since I can remember. I was so used to it that I used to think it was normal to have back pain. After several months of Connective Therapy treatments, I rarely feel back pain anymore, except for occasional muscle soreness after I do things like work in my garden.”

A professional dancer spoke of her shoulder injury just before a performance after one session: “I’m not sure I would have been able to perform last weekend had I not had that treatment.”

A physician client said of his back pain: “If I hadn’t dealt with the emotions I was holding in my back, I can see how that could lead to chronic pain or even surgery.”