Home » Uncategorized » “The Time of Your Life”

“The Time of Your Life” 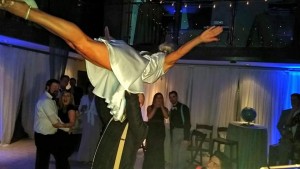 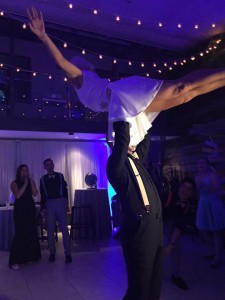 In my 13 years of performing and competing in Latin and theatrical dance (partner lifting); and my lifetime as a competitive athlete, including boxing, racquetball, and other sports and martial arts; I have had many moments where I have felt inspired and moved about a dream I had after transforming fear into triumph.  I recently received a text message that was definitely one of the highlights, though it was regarding playing a part in others transforming their fears into the realization of a gloriously beautiful dream.  It was from Jaclyn, a newlywed who I had been teaching a lift to, along with her then fiancé, Ben.

But let me back it up a few months first.  I received a message from Olga Cansino, a former dance partner, about a couple whom she was teaching and choreographing their wedding dance for.  Apparently the bride to be, Jaclyn, wanted to put the bird, aka “The Dirty Dancing Lift” into the finale of the routine.  Olga asked if I would assess their ability to do the lift, and if I thought they could achieve it, teach it to them.  I was intrigued, and agreed to work with them.

I was soon contacted by Jaclyn after an email introduction from Olga.  She quickly struck me as a high energy, take the bull by the horns kind of person who had a very clear vision of how she wanted her wedding to be – and doing The Dirty Dancing Lift was definitely a big part of that vision.

I suggested that they might want to have my partner at the time, Raquel Ward, help with the lesson as well.  They opted to just work with me.

The first time I met with them, I observed the ratio difference between their sizes.  Ben was about my height, but not as muscled.  Jaclyn was much taller than my partner, Raquel; and also had bigger muscles and bones.  While neither of them were obese, neither were as lean as Raquel and I.  Given that they were both new to dance, and neither of them had done a dance lift before – let alone a relatively advanced overhead one – I knew right away if they were going to do it, it was possible, yet pushing the limits – and it would require a lot of work on their part.

The first thing I did was teach them floor exercises to work on the balance, strength, and correcting skills necessary to safely do the bird overhead.  I did them with Jaclyn first so they would have a better understanding of what to do. They did those fairly well for the first time, and I encouraged them to continue practicing those drills on their own.

As with the exercises, I did the lift with Jaclyn first so Ben could see what it looked like, and Jaclyn could experience what it felt like.   Jaclyn and I were able to do the lift together consistently right away.  After that initial success with me, Jaclyn felt confident that she had the skills from day one necessary to do it.

Then came the true test to see what they could do together physically, technically, and emotionally in the actual lift.  After several tries that day until the point of fatigue on Ben’s part, they got about 60% of the lift accomplished.

I generally won’t put a lift in a routine I plan to perform in the near future that I can’t accomplish on the first day of practice.  However, they almost accomplished it, and they had two months to get it.  Still I urged them to consider another lift that would be easier to learn. Jaclyn insisted on doing the bird, and Ben was committed to giving her that gift for their special day.  So the bird it was.

From there, I had to put a strategy together to help them accomplish this very challenging feat.  I instructed them to continue with the exercises I taught them, scheduled our next meeting – which was further away than I thought ideal – and let them know I would contact them soon with a plan.

So, after some contemplation, I put together a speech in the form of an email:

“I’m going to be very honest and direct with you since your desire to do the bird is something that requires safety awareness, and you want to accomplish it before your wedding.

I think it is imperative that we bring in Raquel to have her do the bird with Ben so he has the confidence that he can do it.

A dance partnership is a microcosm of a marriage. The issues you will have in your marriage will also be apparent in your dance partnership. This is a great opportunity to develop your partnership skills for the life you are starting together. Both partners are equally important. It is important to avoid blaming, but rather to focus on figuring out how to solve the bird or other challenges together.

Regarding the bird, you both need to put in equal effort to make it happen.  The effort I suggest is that Ben develop some needed strength and flexibility, that Jaclyn lose 5-8 pounds between now and the wedding; and that you together, and with Raquel and my coaching, develop the skills and confidence to be able to achieve this safely and beautifully.

I believe you need to work with us no less than weekly.

You really want to be able to achieve this, and I believe you can. But this is the price that comes with it.  You have to decide if you are willing to pay it.”

They mulled it over for a day, and then I got a clear and to the point response back from Jaclyn:

We are in!!  We appreciate your honesty and support.

We have a lesson with Olga this Friday at 5:30 for an hour so we can meet you after that.  Does 7pm work?  At your house?

Also, would it be possible to have your partner attend this class with us too?

Thanks for all your help.

As I predicted, Ben was able to do the bird with Raquel right away.  I could still do it with Jaclyn with relative ease.  Yet they struggled to do it together.  They each trusted that Raquel and I knew what we were doing, and so they felt more confident.  So I encouraged them to keep their focus on doing their part 100% regardless of what their partner had done in previous attempts.  The more each of them did that, the more trust they could develop for each other that the other person would do their part.

The biggest hurdle for Jaclyn and Ben, as with anyone doing lifts, was psychological.  It had mostly to do with the language they spoke to themselves and the stories their minds created about what they were doing .  I could see the internal dialog from how they were moving.  In particular, they were both holding back in their own ways.  So Raquel and I helped them with that.

With both of them, we told them that whenever they are approaching the lift, the only option in their minds can be going up.  Ben’s biggest struggle was not fully committing, and staying with it even though there were challenges along the way, part of which was Jaclyn freaking out over his head.   For Ben, I gave him an internal mantra I have used when beginning a challenging lift: “I have superhuman strength!”  Then that fear, doubt, and nervous energy turns into raw, directed power – and it becomes true.  Jaclyn’s biggest struggle was allowing her weight to go over Ben, which can feel like she is falling.  Raquel helped Jaclyn identify unconscious physical habits she was developing that were throwing off the lift.  We encouraged both of them to allow the lift to be one beautiful and continuous motion.  Any stopping or thinking along the way makes it heavy.

After several back and forth weeks of incremental progress, and observing how they moved and their strengths and weaknesses, I created an entrance and exit for the lift that, as far as I knew, would be unique to their wedding dance, and was two lifts combined into a lift combination ending with a beautiful dip and embrace – and of course a kiss.

Raquel had to travel, so the last few rehearsal were just with me again.  Thankfully the timing worked out well that they got what they needed from her.

The last time I saw them, which was about a week before their wedding day, they both literally looked like different people than the ones I had met just two months earlier.  Not only had Jaclyn far exceeded the weight loss I had suggested, but Ben had also lost a significant amount of weight.  They were an attractive couple before.   Yet now they looked stronger, more confident, fitter – like dancers – and literally something vibrant and life affirming was beaming through their flesh the last time I saw them dance their routine together.  It was touching to watch them move together with dreaminess in their eyes and grace in their bodies.

Still there was a level of uneasiness as they left.  I had done my part as best I could.  They had done theirs as best they could up to that point.  Yet they had not progressed to an ideal level of competence.  And just like in the movie, the suspense lasted until the moment of the lift.

I didn’t hear anything until two days after their scheduled wedding date in California.  When I received the photos, my response was: “It looks like someone was having the time of their life!”  Yes!  They did it!  The peoples’ expressions in the background say it all.

Whatever your dreams are, no matter how big or small, go for it!  Be uncomfortable.  Be afraid.  Tell yourself that you have superhuman strength – and watch the fear dissolve and transform into something amazing.  And only then will you have the time of your life!

All the best to Jaclyn and Ben!  From What I’ve seen of the way you partner together, you will both stay 100% committed to doing your part to make your love  and marriage grow and thrive.

Many thanks to Raquel Ward in this and all the wonderful adventures we have shared.  Beautiful choreography, as always, Olga Cansino!  And thanks for the referral!